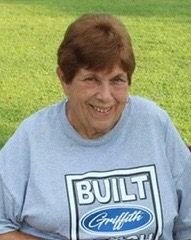 Nancy L. Kennedy Griffith, 80, of Langeloth passed away on Monday morning February 28, 2022 in The Washington Hospital surrounded by her loving family.
She was born on November 15, 1941 in Wheeling, WV a daughter of the late David and Opal Frye Kennedy.
A graduate of the Union High School in Burgettstown, she also attended IBM Business School in Baltimore. After raising her family she worked for Panhandle Foods in Slovan from where she retired. She enjoyed relaxing with her husband on their pontoon boat on Pymatuming Lake, traveling especially to Las Vegas and was known for her famous BBQ sauce.
Her loving husband of 56 years, Larry L. "Herk" Griffith passed away on December 14, 2017.
She is survived by her three children and six grandchildren, Sandy Griffith of Burgettstown and children Joseph (Maddy Shoaf) and Noah Lindsay, Linda Degenkolb and husband Darryl of Burgettstown and children Craig Degenkolb and wife Katie and Ryan Degenkolb and wife BillieJo, Michael Griffith of Burgettstown and children Kennedy (Sam Bassinger) and Hunter (Devon) Griffith; great grandchildren Isabella, Ava, Jase, Jersey and Karabella; brother-in-law Chuck Amos of Virginia; and several nieces and nephews.
Deceased in addition to her parents and husband is her sister Pat Amos.
Friends will be received from 2:00-8:00 p.m. on Wednesday March 2, 2022 in the Lee & Martin Funeral Home, 73 Highland Avenue, Burgettstown, PA 15021. A Celebration of her life and luncheon will be held from 4:00-7:00 p.m. on Thursday March 3, 2022 in the Burgettstown Volunteer Fire Department Social Hall, 1507 Main Street, Burgettstown.
Those wishing to remember Mrs. Griffith in a special way can make a memorial donation in her honor to Burgettstown Youth Wrestling Boosters, c/o Joey Vigliotti, 20 Bavington Road, Burgettstown, PA 15021.
www.leeandmartinfuneral.com
To order memorial trees or send flowers to the family in memory of Nancy Kennedy Griffith, please visit our flower store.