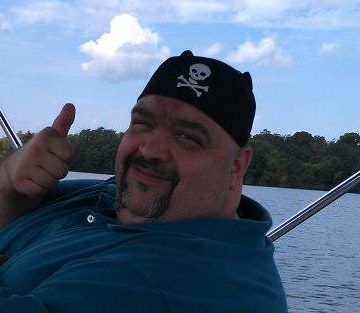 On Thursday, April 15th, 2021, Michael James Vigliotti, beloved father of three, friend to almost everyone he met, and cherished member of his family, passed peacefully at home in Salem, Ohio. Michael was born on June 24th, 1965, the son ofAnne Marie Vigliotti of Burgettstown and the late Ralph James Vigliotti. He graduated from Burgettstown High School (1983) and continued his education at California University of Pennsylvania, earning both his Bachelor's and Master's degrees. While at Cal U., Michael found his calling in residence life and student affairs. In 1996, "Big Vig" continued to work in his chosen field at Slippery Rock University, where he became an impactful student advocate known among the SRU community. For over 25 years Michael brought joy and laughter to students and colleagues, most recently as a Residence Life Associate Director. Mike was also the President of the SRU chapter of the State Colleges and University Professional Association.
An outgoing, kind, and fun-loving individual, Michael's warmth and humor were infectious and genuine. His caring and humble nature put people at ease; his love of life made those around him enjoy the moment as well. Michael enjoyed many activities and interests, including fishing, competitive card playing,
horse and dog prognostication, impressions (Belushi, Cheech and Chong), music, and the Steelers, Pirates, and Penguins. Though Mike had many friends and interests, his life was not complete until his daughters were born. Spending time with his three daughters was his greatest joy in life. He cherished every moment of time with "my girls". What made him most proud was seeing his daughters express themselves through their interests and witnessing their accomplishments.
Michael is preceded in death by his father, Ralph James Vigliotti (Cheryl), and in addition to his mother, is survived by his three daughters, Sophia, Mia, and Vienna and their mother and his former wife Becky Baddeley; brothers, Ralph Vigliotti (Stacey), Scott Russell, Kevin Russell (Natalie), Sister, Kari Vigliotti, uncles, Louis Vigliotti (Sally), Lucien Mazerolle; aunts, Denyse Mazerolle, Therese Lapointe, Gemma Therrien, Ghislaine Mazerolle, Huguette Rheaume; nieces Rachel Vigliotti (Andrew McCray), Korrin Russell, Haley Russell, Victoria Vigliotti. Nephews, Roger Vigliotti, Jake Shipley, Caleb Russell and numerous cousins.
A gathering of friends and family of Michael Vigliotti will take place on Thursday, April 22nd at the Lee and Martin Funeral Home, 73 Highland Avenue, Burgettstown, Pa 15021 from 1:00pm to 4:30pm with a service celebrating his life beginning at 4:30pm. Immediately concluding the services at the funeral home on Thursday, a luncheon and continuation of fellowship will follow at the Langeloth Community Center.
In Lieu of flowers, those wishing to can make a "tribute gift" to the Slippery Rock University Foundation or by mailing checks payable to SRU Foundation, Memo: Michael J. Vigliotti, to SRU foundation, Inc., 104 Maltby Ave. Suite 100, Slippery Rock, PA 16057.
To order memorial trees or send flowers to the family in memory of Michael "Big Vig" Vigliotti, please visit our flower store.