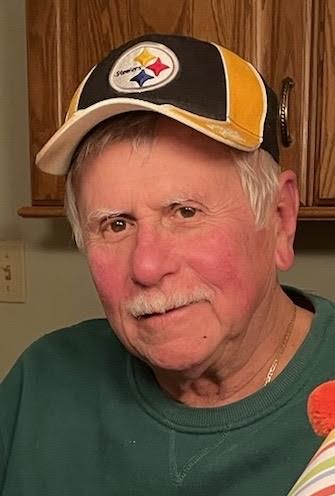 Kenneth Francis Abate, Sr., 77, of Slovan, passed away on Wednesday evening June 1, 2022 in Southmont of Presbyterian Senior Care, Washington.
He was born on January 31, 1945 a son of Frank and Margaret Borish Abate.
A 1963 graduate of the Union High School in Burgettstown, he honorably served in the United States Navy from 1968-1970 on the USS Intrepid during the Vietnam War. He was honorably discharged as a recipient of the National Defense Service Medal, the Vietnam Service Medal with two Campaign Stars and the Navy Unit Commendation Ribbon.
Mr. Abate retired from J&L LTV Steel in Aliquippa. He enjoyed hunting, fishing and taking his 1984 Trans Am to car shows and cruises. He  was an active member of the Slovan Veterans of Foreign War Barto Post 6553 where he was in the Honor Guard.
He is survived by his son Dominic Abate of Slovan; his grandchildren Trevor, Carter, Mason and Jilian  Abate, and Taylor, Molly and Tomi Pavan; a great granddaughter Kinsley  Abate;  his sister Margie Kriznik and husband Frank of Imperial; and his former wife Denise Chappell Rumbaugh of Emlenton.
Kenny is also survived by his loving companion of 30 years  Joann Porchiran Testa, and her daughter Kristi Pavan and husband Gregg.
Deceased in addition to his parents is his son Kenneth Francis Abate, Jr.  and his wife Gisela Garcia.
Friends will be received from 2:00-6:00 p.m. on Sunday June 5, 2022 in the Lee & Martin Funeral Home, 73 Highland Avenue, Burgettstown, PA 15021 where departing prayers will begin at 10:30 a.m. on Monday June 6, 2022 followed by a Mass of Christian Burial at 11:00 a.m. in Our Lady of Lourdes Church of St. Isidore the Farmer Parish, 1109 Main Street, Burgettstown with the Rev. Zachary Galiyas, Celebrant.  He will be laid to rest with full Military Honors accorded by the Slovan V.F.W. Honor Guard and the US Navy in the Our Lady of Lourdes Cemetery.
Those wishing to remember Mr. Abate in a special way can make a memorial donation in his memory to the Slovan VFW, 65 Run Street, Slovan,PA 15078
To order memorial trees or send flowers to the family in memory of Kenneth F. Abate, Sr., please visit our flower store.