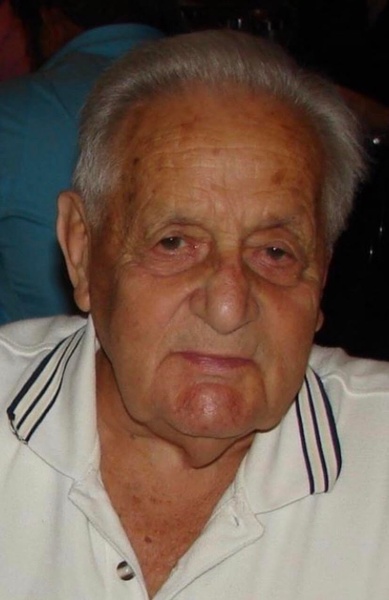 Joseph Thomas Lazzaro, “Pee Wee” 93, of Burgettstown, passed away peacefully on Tuesday morning, August 9, 2022, with his loving family by his side.
He was born on July 5, 1929, a son of the late Thomas Joseph and Phyllis Fasula Lazzaro.  Joe is survived by the love of his life, Frances Rinella Lazzara, whom he married on October 10,1953.
He was born and raised in Avella, where he attended school and was the owner of Lazzara’s Tavern in Cedar Grove for 18 years. He later moved to Burgettstown, where he took great pride working in his yard and sitting on his porch enjoying his flowers and waving to all of his neighbors.
Mr. Lazzaro was a retired Ironworker of Local 3, Pittsburgh, where he was a lifetime member for 70 years. He enjoyed traveling, especially to Deep Creek, and to various casinos. He loved music, watching the Steelers, playing in poker clubs with his wife and his morning coffee with his friends at Bert's in Atlasburg. What brought him the most joy was spending time with his family, especially his grandchildren and great grandchildren. He took great pride in his family and the life he and Frances built together.
Surviving in addition to his wife are his four children, Thomas Lazzara (Georgean) of Boardman, OH, Rosanne Scruppi (Kurt) of Cherry Valley, August Lazzara of Butler and Felicia Bertrand (Buddy) of Moon Twp.; nine grandchildren Julie DeLisio (Joe), Valerie Lazzara Mould (Topher), Joseph Lazzara (Lynn), Conor Faloon (Krissy), Jessica Faloon (Danae), Crystal Raab (Chris), Joanna Lazzara, Hilary Campbell (Ben) and Chad Bertrand (Melissa); great grandchildren Bailey, Maci, Declan, Gianna, Mila, Carolyn, Caleb, Sophia, Madison, Mackenzie, Paul, Paisley, Avery and Karsyn; two sisters Josephine Endler (the late Elwood) of Washington, Georgene Herriott (the late Bill) of Canonsburg; and several nieces and nephews.
He was preceded in death by his parents, two brothers and a sister.
Family and friends will be received from 3:00-7:00 p.m. on Friday, August 12, 2022, in the Lee & Martin Funeral Home, 73 Highland Avenue, Burgettstown, PA 15021 where departing prayers will begin at 10:30 a.m. on Saturday, August 13, followed by a Mass of Christian Burial celebrated by the Rev. Zachary Galiyas at 11:00 a.m. in Our Lady of Lourdes Roman Catholic Church of St. Isidore the Farmer Parish, 1109 Main Street, Burgettstown. Interment will follow mass in Our Lady of Lourdes Cemetery.
Those wishing to remember Joe in a special way can make a memorial donation in his memory to the Burgettstown Community Library, 2 Kerr Street, Burgettstown, PA 15021.