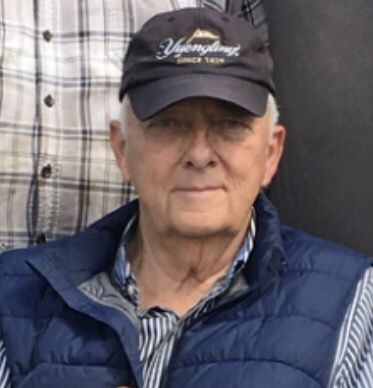 David Scruppi, 81, of Cherry Valley passed away peacefully on Tuesday morning, June 8, 2021 in his home with his loving wife at his side.
He was born on June 1, 1940 a son of the late Peter and Mary Stanish Scruppi
Mr. Scruppi served in the United States Army as a PFC in the 54th Artillery Group, Ft. Bragg, NC.
After retiring from J&L Steel in Aliquippa, he founded H.T. Water Service before working for Dellaria Ford-Lincoln-Mercury in Burgettstown, Jake Schneider Bus Company and Ponderosa Golf Course in Hookstown where he was a Ranger and worked in the Pro Shop.
An avid golfer, he achieved 2 hole-in-ones at Ponderosa Golf Course.
His wife of 60 years Carole McFarland Scruppi who he married on May 5, 1961 survives.
Surviving in addition to his wife is his daughter Debbie Hoberek and husband Huck of Burgettstown; his two grandsons who he loved and will carry his legacy Drake and Heath Hoberek; his brother Paul Scruppi and wife Anita of Cherry Valley; a sister Genevieve Cherenko, wife of the late Pete of Cherry Valley; and several nieces and nephews.
Deceased in addition to his parents is his daughter Diane Scruppi; and his brother Pete "Sam" Scruppi and wife Jean.
To honor Dave's wishes there will be no public visitation and inurnment will be held privately in the Mt. Prospect Cemetery, Hickory.
Those wishing to remember him in a special way can make a memorial donation in his memory to The Mario Lemieux Center for Blood Cancers, UPMC Hillman Cancer Center, 5115 Centre Avenue, Pittsburgh, PA 15323 www.hillman.upmc.com
Arrangements are under the direction of the Lee & Martin Funeral Home, 73 Highland Avenue, Burgettstown, PA 15021.
To order memorial trees or send flowers to the family in memory of David Scruppi, please visit our flower store.