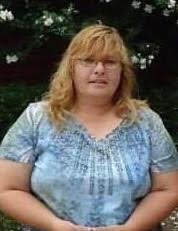 Betty Jo (Pierce) Brown, 57, of Tarrs, passed away peacefully at home with her loving mother and husband by her side on Saturday July 16, 2022 following her courageous battle with cancer. She was born on June 21, 1965 in Burgettstown, daughter of John R. and Gloria J. Pierce of Burgettstown. Betty was a 1984 graduate of Burgettstown Jr/Sr High School. Betty’s recent employment was as a Dietary Technician at McMurray Hills Manor. She married Stephen Brown on September 20, 2008 in Petoskey, Michigan.

Betty was very artistic in many ways and enjoyed crafting of all kinds, especially wreath-making. She enjoyed playing card games and bingo with family and friends. She loved to be in nature, as she enjoyed camping, watching the hummingbirds and admiring her beautiful flowers in her garden, and watching the goldfish in her pond in the backyard. She was a collector of crystal knickknacks and porcelain dolls. Betty was a caring and generous woman. She loved most of all to spend time with her loved ones and close friends who she held very dear to her heart. Betty was an honored member of the Women’s Auxiliary of the American Legion Post # 446 of Mount Pleasant.

A Celebration of Life will be held on Saturday July 23, 2022, from 12pm-4pm at The American Legion of Burgettstown, 1526 S. Main St. Burgettstown, PA, 15021. The family would like to specially thank Lee & Martin Funeral Home of Burgettstown for providing services for many years for the Pierce family.

To order memorial trees or send flowers to the family in memory of Betty Jo (Pierce) Brown, please visit our flower store.